By Yi-Jin Yu
Share —
Sign up for our newsletters to get GMA delivered to your inbox every morning!

Homeowners around the country are getting into the Thanksgiving spirit with a dash of dark humor.

Instead of your typical turkey and gourd decor, some are repurposing their oversized Halloween skeleton decorations -- like the 12-foot version famously sold by Home Depot -- and giving them a November makeover.

Joey Ramirez, a resident of Carlsbad, California, has an extra tall lawn skeleton holding up a colorful "Give Thanks" banner, sporting a gray "Lost in the sauce" T-shirt alongside an illustration of an opened can of cranberry sauce.

Courtesy of Joey Ramirez
Joey Ramirez's larger-than-life skeleton features a mini skeleton on its left shoulder and is on display in Carlsbad, California.

Ramirez's skeleton has a smaller skeletal companion perched on its shoulder and has a turkey headband for good measure.

In a tweet sharing a photo of his skeleton, Ramirez called it "the gift that keeps giving."

Michelle Decker, a self-described Halloween aficionado from Sunfield, Michigan, told "Good Morning America" she likes to bring out her giant skeleton for the season starting in August and September and keep it on display in front of her house through the holidays.

Decker bought her 12-foot skeleton, whom she named Walter after the character from Tom Hanks' 1989 black comedy "The 'Burbs," from Home Depot last July for about $299 and doesn't regret it one bit. 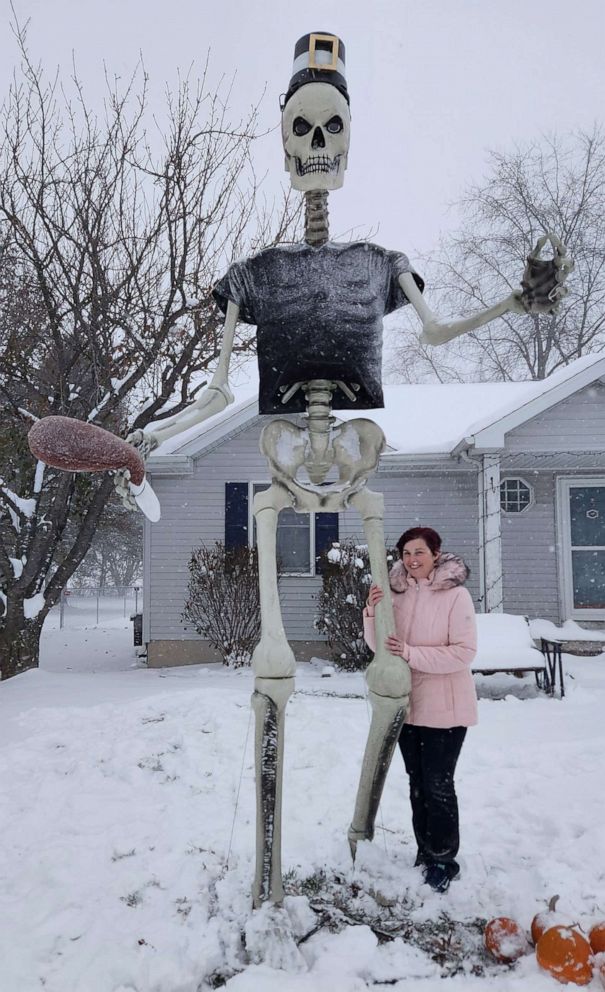 Courtesy of Michelle Decker
Michelle Decker, who bought her 12-foot skeleton at Home Depot, told "GMA" she's named it Walter, after a character from Tom Hanks' 1989 dark comedy "The 'Burbs."

"It's so much fun. It's the one time a year where you can make your house, your yard look kind of silly," Decker, 45, said.

"It just gives ... something unique, something special when people drive by. We live on a road where people generally go about 20-25 miles an hour so there's plenty of time for them to slowly drive by and see that," she added. "What I want to do is entertain people with him."

This year, Decker dressed up Walter with a pilgrim hat and black T-shirt and gave him a turkey leg to hold, propping several pumpkins near his foot.

Vanessa Corcoran, an advising dean at Georgetown University, shared her own photo of a seasonally appropriate skeleton -- complete with a cascading necklace of fall leaves and a "Give Thanks" banner -- in her Washington, D.C., neighborhood. 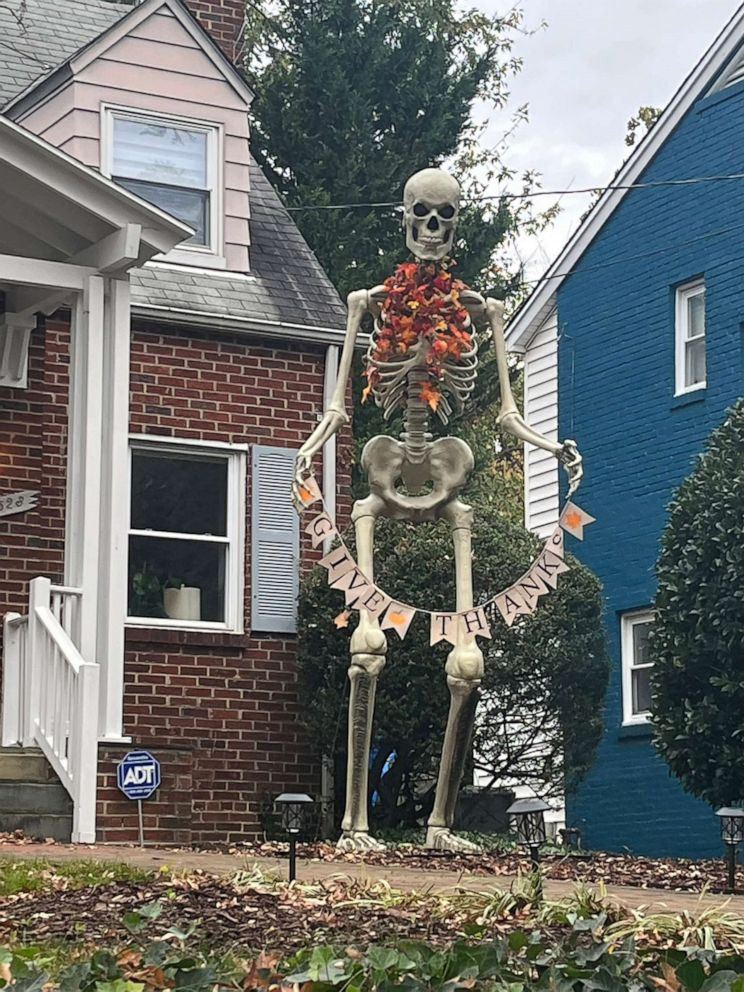 Courtesy of Vanessa Corcoran
Vanessa Corcoran snapped a photo of a decorated skeleton with a "Give Thanks" bannner in her Washington, D.C. neighborhood on Nov. 14.

"My daughter loves skeletons and is so thrilled that the one in our neighborhood is still here," Corcoran wrote in a Nov. 16 tweet.

MORE: This 2-year-old brings a 5-foot skeleton with him everywhere he goes

Angel Sonn of Clarksville, Tennessee, is excited to share her skeleton with the world as well. Sonn told "GMA" via e-mail that her daughter inspired their 12-foot skeleton, which wears headphones and a T-shirt proclaiming "It's Leg Day," while holding a barbell in its left hand and an inflatable turkey leg in the other. 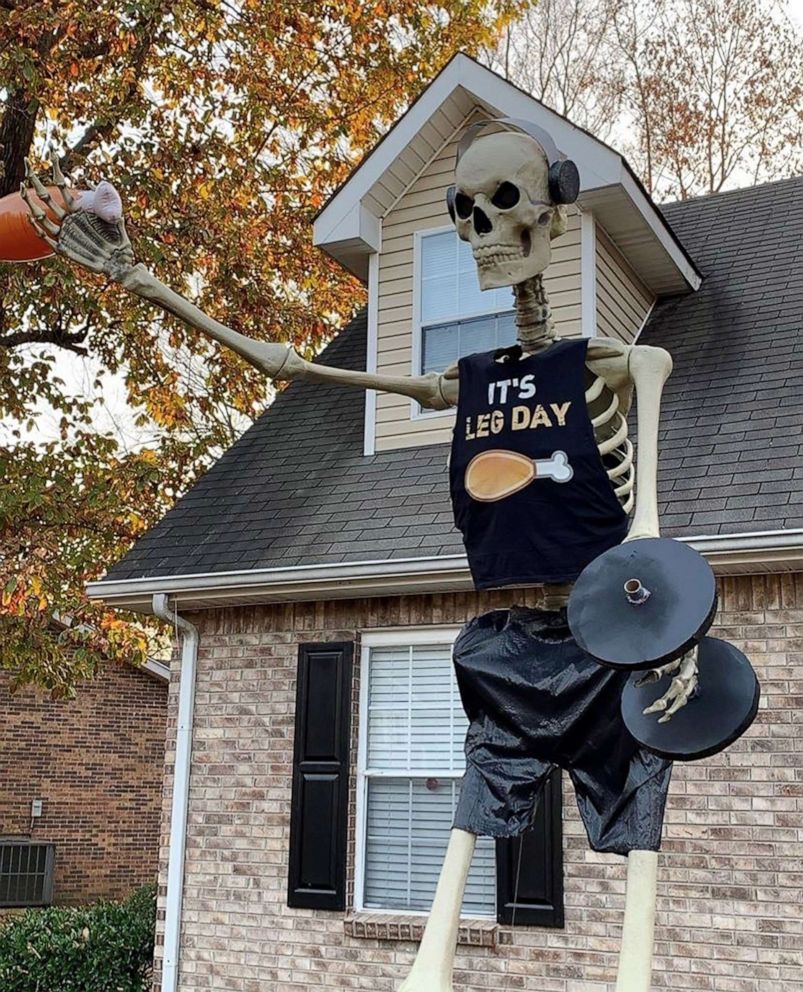 Courtesy of Angel Sonn
Angel Sonn's Thanksgiving-themed skeleton is all about working out and holds a dumbbell in one hand and a turkey leg in the other. Sonn's skeleton also sports a black T-shirt saying "It's Leg Day."

"I have a daughter that truly inspired this guy … she works out hard," Sonn wrote. "We just wanted to have fun and do something out of the ordinary."

Treat yourself this holiday season with this DIY bath bomb kit