Two families who have been sharing Thanksgiving dinner together after an accidental text message in 2016 are revealing their holiday plans amid the pandemic.

The tradition began when Wanda Dench, now 63, thought she was texting her grandson to invite him to Thanksgiving when she actually texted Jamal Hinton, now 21.

Every year since that first exchange went viral, Hinton would tweet a photo of himself with Dench enjoying Thanksgiving together. Dench's husband, Lonnie Dench, would also be present.

On April 5 of this year, Lonnie died from complications of COVID-19, according to Hinton and public statements made by Dench.

In July, Hinton posted a video on YouTube documenting a dinner he and his girlfriend, Mikaela, shared with Dench.

"It's been kind of trying since Lon passed away back on April 5 from COVID-19," Dench says in the video, adding that she, too, tested positive for the virus. "I want to say thank you to all of the people that sent their blessings and their condolences and their well wishes for me."

"It was just really heartwarming and helped me get through a lot of tough days," she said. "It's still going to take a lot of time ... but when I get visits from these guys, it really perks me up." 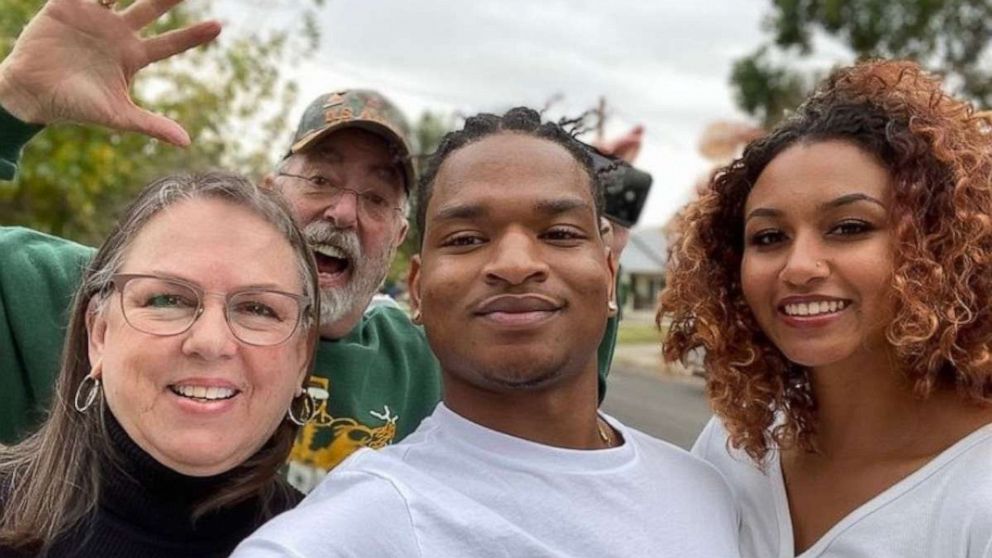 Jamal Hinton
Two families who have been sharing Thanksgiving dinner together after an accidental text message in 2016, are revealing their holiday plans amid the pandemic. The tradition began when Wanda Dench of Mesa, Arizona, now 63, thought she was texting her grandson to invite him to Thanksgiving when she actually texted Jamal Hinton, now 21.
Editor's Picks
MORE: Grandma who texted wrong teen for Thanksgiving shared 4th holiday with him

Dench said she and Lonnie were married for 43 years, and Hinton said Dench recently held a small celebration of life for her husband.

"Lonnie, he was just very supportive of everything that me and Wanda did and the whole Thanksgiving story" Hinton told "Good Morning America" Thursday. "He was just a [good] friend."

Hinton was a high school senior in 2016 when he replied to Dench's accidental text message. He asked for a photo to confirm if it was his own grandmother behind the text. The picture came in of a woman with blonde hair and glasses -- not Jamal's grandma.

"[You're] not my grandma," Jamal replied with a laughing emoji.

Hinton of Phoenix, Arizona, sent back a selfie to let her know he was not her grandson and asked if he could stop by for dinner anyway.

Somebody grandma is coming in clutch this year!! Ayee!!! pic.twitter.com/QGrx83nHLl

MORE: College students urged not to travel home for Thanksgiving amid COVID-19

Dench replied, "Of course you can. That's what grandmas do ... feed everyone."

This year marks the pairs fifth Thanksgiving together.

Due to COVID-19, the CDC recommends that if you are hosting a Thanksgiving gathering to have the meal outdoors if possible or open windows to increase circulation, limit the number of guests, be clear with guests about expectations for keeping distance and wearing masks.

Hinton said he's been quarantining for two weeks so he and Dench can have an in-person, socially-distanced meal together.

"It's become a huge part of our lives," Hinton said. "It's great being part of something so loving and having people around the world to talk to us and being touched by our story."

Connecticut teachers foster, then adopt student: 'It was a no brainer'