By Katie Kindelan
Share —
Sign up for our newsletters to get GMA delivered to your inbox every morning!

Prince Harry and Meghan's highly-anticipated docuseries is due to air in December, one month before Harry's memoir is published.

An exact premiere date for the docuseries, which will air on Netflix, has not yet been announced by the streaming platform.

The only hint so far of what the docuseries will cover has come from Meghan, the Duchess of Sussex.

The 41-year-old former actress spoke to Variety about working with the docuseries' director, the Oscar-nominated Liz Garbus.

"It's nice to be able to trust someone with our story -- a seasoned director whose work I've long admired -- even if it means it may not be the way we would have told it. But that's not why we're telling it," Meghan said. "We're trusting our story to someone else, and that means it will go through their lens."

She continued, "It's interesting. My husband has never worked in this industry before. For me, having worked on 'Suits,' it's so amazing to be around so much creative energy and to see how people work together and share their own points of view. That's been really fun." 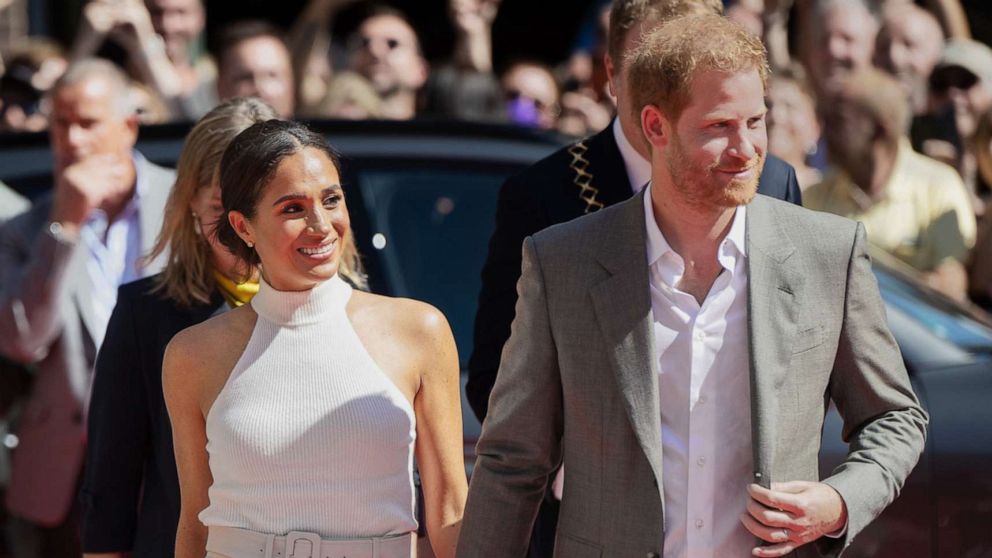 Samir Hussein/WireImage
Prince Harry, Duke of Sussex and Meghan, Duchess of Sussex during the Invictus Games Dusseldorf 2023 - One Year To Go launch event on Sept. 6, 2022 in Dusseldorf, Germany.

In an interview in August with The Cut, Meghan hinted that the project may show some of her and Harry's love story.

The Netflix docuseries is part of a deal with the company the couple inked in 2020, shortly after they stepped down from their roles as senior working members of Britain's royal family.

At the time the deal was announced, a source close to the couple told ABC News that it would allow them to produce films and series, including docuseries, documentaries, features and children's programming.

"Our focus will be on creating content that informs but also gives hope," the Sussexes told The New York Times in a statement at the time. "As new parents, making inspirational family programming is also important to us."

Harry and Meghan now live in Montecito, California, with their children Archie and Lilibet.

The couple's foundation, Archewell, includes a production arm that focuses on audio as well as television and movies.

MORE: Meghan Markle says she was 'bit of a loner' and 'really shy' growing up

Harry's memoir "Spare" is scheduled to be released in early January, one month after the docuseries airs.

The publisher of "Spare," Penguin Random House, said the book contains "raw, unflinching honesty" and described it as a "landmark publication full of insight, revelation, self-examination, and hard-won wisdom about the eternal power of love over grief."

When the book was first announced last year, the Duke of Sussex said it would be a "firsthand account of my life that's accurate and wholly truthful."